I told you to stay tuned, didn’t I?RT Lowe has done it again with Tides of Winter, the third installment in the Felix Chronicles story . 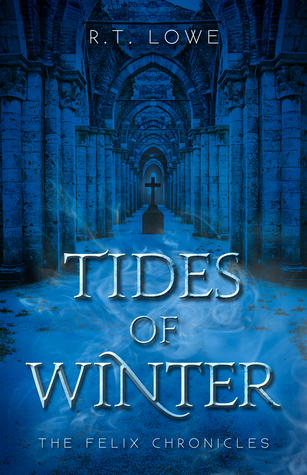 Have you ever read one of those stories that the characters and locations are just there, beyond the edges of the book? As the series has progressed, Lowe has continued to refine Felix and his friends (and enemies). The descriptions of the most ordinary scenes tend to jump off the page.

Felix drank his beer. It was cold and tasted good, an IPA from a local brewery. Allison stared at Bill, her eyes as frosty as the bottle in Felix’s hand. (p. 17)

Difficult points in the story are offered with colorful imagery:

Then the heavens fell and the dunes rose, merging into each other, lending together, turning the sane beneath his feet into something neither gas nor liquid, breathable but heavier than air, and as blue as a Fijian sky on a cloudless day … A feeling of warmth and happiness flooded his being and he reached out for the voice and let himself go. (p. 175)

Lowe uses levity in proper doses and at times when the narrative needs to be lightened. For example, when Felix comes into an unexpected inheritance, Allison says, ‘Fifty million dollars, huh? Think you can afford to buy me a coffee?’ (p. 252).One area where many writers suffer is balancing how much back story to provide in each part of a series. This segment of Chronicles maintains enough information about the previous parts that a reader starting here would not be completely lost. Additionally, this portion of the story contains more commentary on society than the earlier two, owing perhaps to the current state of affairs in the world; readers will see nods to social justice and politics.

The community was incensed, and Felix thought it odd how it seemed people accepted the news of human death — even mass death — in relative stride, yet the death of an animal provoked an avalanche of outrage. (p. 73).

No spoiler, but the text ends on something of a cliffhanger. Despite Amazon’s listing of Tides as the third in a three-part series, it is hoped that it won’t be the last installment.