The future does not eliminate disparity between ‘people’ groups. There are some in the time of AI who felt humans were the only ones who deserved ‘life’. 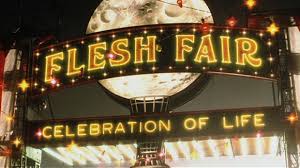 Flesh Fairs were places where people celebrated life by destroying old robots via some of the most terrible methods possible (ripping apart, shooting out of cannons into large turbine blades, pouring acid on them …).

The Flesh Fair dude (the one on the left, pointing to David and Gigolo Joe — more on Joe in a later post) flies around in a hot air balloon that looks like a full moon from which he shouts ‘Any ol’ iron?’ to call out the broken and discarded robo-people. He captures them and brings them to Flesh Fairs.

It may be a commentary on what societies do with those it deems too different to live, or maybe it’s just a scene in a movie, a scene about broken robots.