There is an artist called Pogo who made a recording of voice snippets from AI and turned it into a great song. Search Youtube for ‘Just Blue Fairy’. I’ll wait. 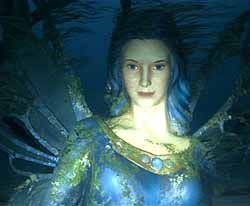 If you’ve seen the film, you know that the blue fairy was from the story of Pinocchio but became something in David’s mind. She was the one who could make him a real boy, who would be so real his ‘mommy’ would love him. She could change him into that which he knew he was not.Professor Hobby took to that story because the blue fairy was more like a shadow of memory in David’s electronic brain: she was not dissimilar to the company logo for where David was created.She becomes a useful tool for the aliens that come later, but that’s for tomorrow’s post. For now, suffice it to say that Blue Fairy is probably quite like that image of safety we all create. She is the strength we don’t have to fight our monsters. She is the miracle worker who can solve all our problems. She is the loving arms into which we can sink and never worry again when we are feeling low.She is the part of us we retreat to when all else seems to have abandoned us to the worst of our days and nights.